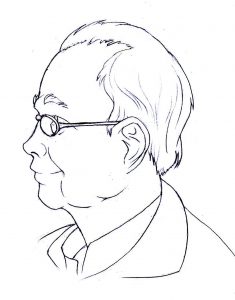 By all indications, Dr. Reynaldo Lesaca grew up a gifted child… long before people knew or fully comprehended what a gifted child was. He was brilliant with his math subjects, and he finished his secondary school in just three years.

This was made even more impressive by the fact that, because his family was not well off, he would study late into the night, in the late ‘20s and  the 1930s, via an improvised light made from a piece of string on a bottle cap, floating on coconut oil in a saucer.

He became the youngest student to enter the UP College of Engineering, at the age of 15. And because he maintained a grade point average of 1.50 and up for his three years of engineering studies, he was granted the Hilarion Esquivel Memorial Scholarship Grant for his fourth year.

Soon, he was granted a scholarship by the Rockefeller Foundation, bringing him to the University of North Carolina at Chapel Hill. Here, he finished his Masters degree in Sanitary Engineering.

It was also here that he would meet his childhood idol, Albert Einstein. Yes, Dr. Rey got to meet the person who is widely regarded as one of the greatest geniuses who have ever lived. Not only that, but he actually interviewed Einstein at Einstein’s own home in 1947, for an article that will eventually be published in a Philippine periodical two years later. He had Einstein to himself for a full hour and a half, talking about everything from politics to physics. Rey was 25 and was the first and only Filipino that Einstein had ever met.

He would then get a Doctorate Degree in Engineering from Johns Hopkins University under a World Health Organization fellowship grant, followed by a Masters degree in Radiation Physics at the University of Rochester in New York. Somewhere in between, he was even able to finish a Masters Degree in Mathematics, with a thesis entitled “Some Geometrical Properties and Physical Applications in a Non-Euclidean Universe.”

As a professional, Dr. Rey was a member of the National Science Development Board, which was the predecessor of today’s Department of Science and Technology. He was a Director of the Philippine Society of Sanitary Engineers. And he became one of two Commissioners of the National Water and Air Pollution Control Commission.

He was appointed as the senior delegate of the Philippine delegation for the first United Nations conference on Human Environment in Stockholm in 1972. Actually he was a one-man delegation. And yet he was able to have the Philippines elected as Chair of the committee on Human Settlements and Environmental Pollution Control. It was a significant feat which even earned him a commendation from the Senate floor.

And still he kept studying. He earned his fourth Masters degree at the National Defense College of the Philippines, effectively making him a Lt. Colonel for the Army Reserve, and graduating with a group thesis entitled “Implications of Establishing Diplomatic Relations with the USSR and the PRC (People’s Republic of China),” a work which actually became one of the bases for the country’s eventually establishing ties with these two countries in the late 70s.

He was Senior Regional Adviser for the United Nations Environment Program Regional Office for Asia and the Pacific, eventually becoming Deputy Regional Director, and then Director and Regional Representative. After this stint, he was a consultant to the National Home Mortgage and Finance Corporation where he developed mathematical and computer programs for calculating monthly amortizations.

And because he was both a scientist and an environmentalist, he became a member of the Board of Trustees of the Haribon Foundation for the Conservation of National Resources.

He has received countless awards, including the Adriatico Centenary Award for Science and Technology, the Certificate of Merit Award for Career Government Civil Engineers, the 1984 award for Outstanding Sanitary Engineer by the Philippine Regulatory Commission, and the 1989 Achievement Award of the National Research Council of the Philippines. In 1969, he received a Presidential Citation for outstanding services to the nation.

He loved Mensa. He became a member of Mensa International in 1979. And he was with Mensa Philippines from the very start, back in 1992. He was always actively joining Mensa activities, and members loved his child-like eagerness to help, to share, and to contribute.

Doctor Rey would become Mensa’s Honorary Chairman, a position that he would hold for the rest of his life.